Fingerpicking blues guitar in open G tuning is perfect for playing atmospheric old style blues straight from the Mississippi. For some people, this is the real blues and there are many fine examples of this style form legends such as Muddy Waters, Son House, Johnny Shines and of curse Robert Johnson. Open G probably came about because, first of all, many stringed instruments were home made on the Deep South just after the end of slavery and the quality was just not good enough to be tuned in a regular fashion and to keep that tuning. Secondly, even in the later days when mass produced guitars were available from companies like Sears, the hot and humid conditions in the Deep South home of the blues meant that they slipped out of tune very easily. 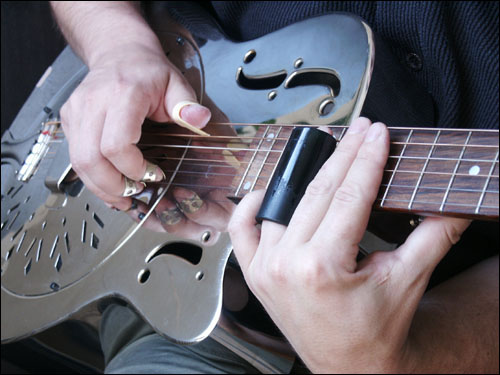 Open G is really easy to tune a guitar down to and slide playing reduces the disadvantages of the two factors we just identified simply because the bottleneck can slide up to a note and oscillate around it, producing a great sound, but also allowing for slight positional adjustment on the fret-board if the note is not quite on pitch. The technique is quite simple to learn in it’s basic form, but fingerpicking blues guitar in this style takes a lot of work to perfect and bring it up the standard of the old blues guys. Both glass and metal bottlenecks can be used, and both have their particular sound, alternatively giving warm and harsh sounds, depending on how the guitar player performs the technique.

This is probably the easiest complete open tuning to achieve and there’s just 3 strings to adjust. Take the bass E down two steps to D, the next bass string (A) take down to G and finally the high E string goes down to D. Strum it open and you’ll recognize the chord instantly as the foundation of many delta blues guitar classics. Now put the bottleneck on the finger of you choice, which is often the ring finger or pinkie, and rest it lightly across the strings without touching the frets. Strum the strings as you slide up and down the fret board. The sound is quite interesting, but there’s something not quite right.

The problem is that the strings are making sounds both between the slide and the saddle, but also between the slide and the nut at the other side. We really only want the notes to sound from the bottleneck to the saddle, and so we need to mute the other unwanted string sounds. This is done by resting another finger behind the bottleneck, just dropping it onto the strings with hardly any pressure. In this way you’ll end up with the sound that you are trying to get – the pure clean music of the Mississippi Delta. Modern fingerpicking blues guitar players tend to make this style a bit too pretty, which pulls it away from the old music. Of course it needs to be accurate, but it must have that passion that makes it what it is. Watch Son House play Death Letter Blues in the clip below: