In this video I’m taking a look at that famous boogie beat often found in dropped D blues songs, using Sam Chatmon’s ‘Brownskin Woman’ as an example. The original Brownskin Woman featuring Sam can be found further on down the page. He really snapped those strings and wasn’t too delicate, but the timing is really impeccable and of course the feeling is pure old acoustic blues guitar.

I like the way he gets his picking thumb behind the strings as he makes that boogie bass run, and just like Robert Johnson/Gary Davis, he sings seemingly without regard to the timing of his guitar fingerpicking pattern – true magic. If you want to learn blues guitar in this old style, it’s vital to listen to the old guys fingerstyles and mastering them before adapting the guitar style to really make it your own.

Sam Chatmon spent his early years playing guitar and banjo in medicine shows and juke joints before joining the Mississippi Sheiks, the foremost traveling string band of that era. Gone were the days of playing the blues to ease your mind after the end of slavery, but it moved up a notch into paid entertainment. As such, these traveling blues guitar players developed a huge repertoire of songs, some blues, some ragtime (or hokum) and many popular songs expected by the rural audiences. 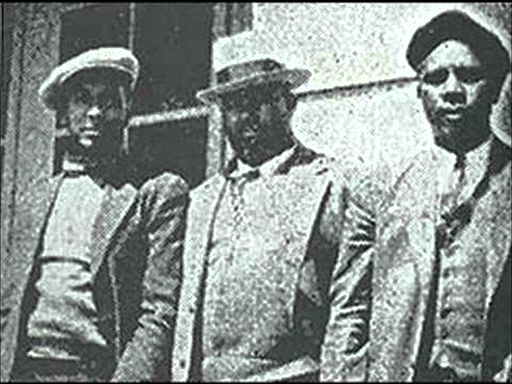 The Carolina Chocolate Drops are a Grammy Award winning old-time string band from the 21st-century. Contradiction? Not Really. Dom Flemons, who fronted the band for many years, knows that if he’s going to bring string music back in style, he’s got to adapt to the times.

The Chocolate Drops were just following the example of the string bands that came before them. Like Chatmon Family, who made up the Mississippi Sheiks. Dom Flemons has more.

Well what ended up happening is a lot of this old time string band music evolved over time as tastes changed, cause that’s one of the main things is like with the establishment of the record companies there were tastes that were picked for what black people and white people wanted. And so you had the situation where the string band music was already falling out of favor. And then every once in awhile you’d find certain groups that were they either they’d made it in just kind of at random or that they changed with the times and had styles that were popular enough so that people would want to buy the records.  And so the Mississippi Sheiks happen to be one of those, they were a family string band and then one of the brothers learned how to read music and started to learn a lot of the pop tunes and applied it into the family’s music and so then they started touring as the Mississippi Sheiks.

So you can see that this kind of music was all the range for quite a short time. Even the acoustic blues of  somebody like Robert Johnson wasn’t that popular until decades after his death – the only track selling any reasonable number was Terraplane Blues, so the number of people making a living out of this style of stringed instrument bands new that their time was limited. Luckily, modern guitarists are once again researching the blues guitar styles and faithfully copying what the old masters created (or trying to!)